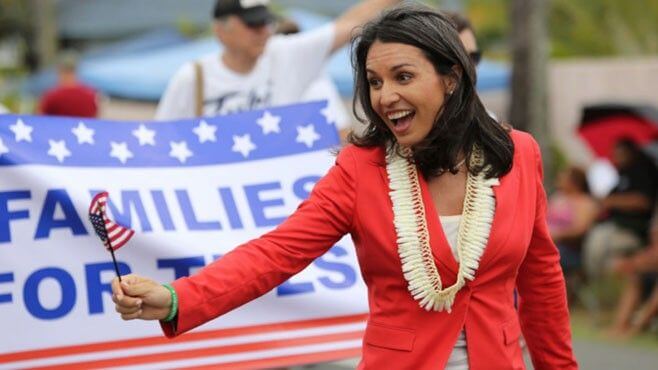 Tulsi Gabbard is an American politician, she was born in 1981 and she is only 38 years old. she is the first Hindu member of the USC(United States Congress). She is also a member of the Democratic Party. Read to know more about Tulsi Gabbard Wiki, Age, Height, Weight, Career, Family, Husband, Biography & More.


Tulsi served in the medical unit of the Hawaii Army National Guard from 2004 to 2005.

She has also served as a Representatives of Hawaii House from 2002 to 2004.

In 2019, she announced her campaign for the nomination for united state’s President.

She started her career at the age of 21. In 2002 she had become the youngest legislator and she was the youngest women ever who elected to a United state legislature.

She introduced the OFF (Off Fossil Fuels) Act in 2017, which set a target for transitioning the United States to renewable energy till 2035. she was also vice chair of the DNC (Democratic National Committee).

Tulsi was born on 12th April 1981. She was born in Leloaloa, Maoputasi County. She is the daughter of Carol and Mike Gabbard. In 1983 when she was two years old her parents moved to Haweli. Her father Mike Gabbard is a member of the haweli senate. when she was a teenager, she chose Hinduism as her religion.

She married Eduardo Tamayo in 2002 and divorce in 2006. after then she married Abraham Williams in 2015.